I wrote the piece about the loss of the bat population in my area in 2011.  You can read about it below and the White Nose Syndrome that was the culprit.

I am happy to say that this year we had two bats flying around the house. Actually one was in the house. I was in awe watching it fly from one side of the kitchen to the other and through the beams of the loft. I was worried it might starve trying to find a bug and having to zoom the lights at night. We left the window open and that was all that was needed to let it out. I wonder how much they care about one another because when it was flying in the kitchen a second one was outside the screen door flying around.  Anyway, the bats seem to be on the way back. I hope there are soon enough to cut down the flying insect population because that has become really bad with the bats being gone.

Why are the Bat’s Gone from Pennsylvania ?

I have been meaning to do some research on this for quite some time. I have not seen one single bat this summer and the mosquitoes are much worse. I live in Schuylkill County in North East Pennsylvania where we usually have a lot of bats flying about in the hours between dusk and dawn. It was just last year that I would sit on the front porch when the sun was going down and hear them waking up in the rafters getting ready for the nights hunt. We even have a bat house on the back side of the house but it never got as popular as the the porch roof rafters. As a kid I was told the normal myths about these beneficial creatures and I guess I believed them. The only good thing I learned back then was not to pick one up.

Bats are beneficial mammals that keep the mosquito population down and pollinate the vegetation. They are a necessary part of our ecosystem just like the bees. The bees, now that’s a whole different post. Without the bat population farmers will use more chemicals to kill the insects on crops which is just one of the detriments caused by the loss of these misunderstood animals. Agricultural plants from bananas to cashews, dates, and figs rely on bats for pollination and seed dispersal. The rain forests which have been cleared more and more every year, is one more area where the bats dropping seeds replenishes the ever disappearing forests. The desert ecosystems also relies on bats, the nectar-feeding species pollinate giant cacti, including the organ pipe and saguaro of Arizona.

I just read that their populations are declining everywhere. More than half of American bats species are considered endangered which is due to the disturbance of roosting bats in caves, the loss of their habitat and the over use of insecticides. I remember reading that the bat has one of the slowest reproductive rates for their size and that most of the females have just one or two babies, pups, a year. The female will not reproduce until she is two years old. This makes it hard for bats to repopulate quickly. Even humans are having 8 at a time as in the case of the ‘Octomom’.

This is very disturbing to me, and it should also be to you. To find out how you might be able to help check out the BCI,  Bat Conservation International’s, their mission is to conserve the world’s bats and their ecosystems in order to ensure a healthy planet.

There is a disease called White Nose Syndrome or just WNS. It was first reported during the winter of 2006-2007 in a few hibernation caves near Albany, New York, where more than 8,000 bats died. During the winter of 2007-2008, it was reported in at least 18 additional caves and mines in four states. In February 2009 WNS sites were confirmed in New Jersey, Pennsylvania, central West Virginia, and southern Virginia. By March 2010 WNS was reported on the west side of the Eastern Continental Divide in both NY and WV. According to the New York Department of Environmental Conservation, WNS has killed 98% of the bat populations in New York, Massachusetts, and Vermont.

I will hazard a guess that Pennsylvania is one more state that is now among those grim numbers.

If you use this post please reference the author

This cat knows how to party 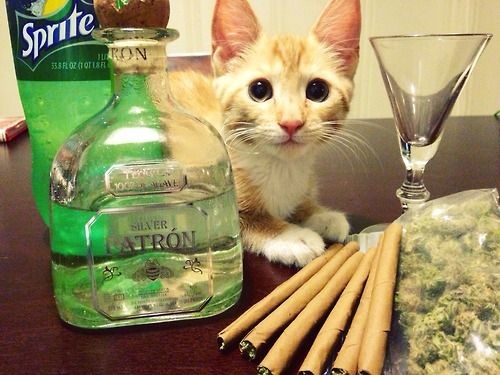